Mr. Rogers Was A Great Man

I have been saving this one for a slow period. June will kick up in he next two weeks with the official weeks of Great Outdoors Month and Men's Health Month, but the first week here is light on men's activities. 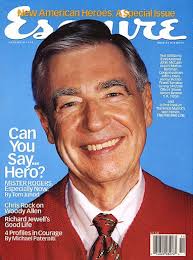 We all know that Mr. Rogers was a 'good neighbor' on his show - showing kids how to live well - but an article on Fred Rogers lists 15 reasons he was good off-camera as well. All of them are examples of him being Compassionate, Decisive, Enterprising, and Sincere. Esquire also did an article on him which is currently posted here.

In addition to being just an all around good guy - tolerant, color-blind literally and figuratively - he was also a perfectionist about his show and even his health. Twice he spoke to congress , once about about public television and also about the ability to record on the VCR, both times turning around the plans with just his words.

Personally, being on the quieter side myself, I learned a big lesson from Mr. Rogers - that you can be powerful without being loud.