Showing posts from June, 2016
Show all

This Saturday June 18, Wisconsin Harley-Davidson in Oconomowoc will host the 4th  HOG and STEER BBQ Competition and Festival , an event in the Kansas City Barbeque Society 's sanctioned contests and this year a part of their  Meals Mission to provide food for the homeless and hungry.
Post a Comment
Read more

It's been a busy, and very sad start to 2016. Deaths of celebrities (athletes and musicians) and many, too many, every day citizens, have dominated my experience so far. But last week I saw something that brightened my spirits, especially for Milwaukee. The Milwaukee Bucks have taken a positive step towards becoming more involved in the community with the launch of the Milwaukee Bucks Foundation .
Post a Comment
Read more

Sorry, But Guns Do Kill People 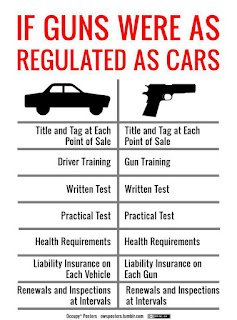 "Cars don't kill people, people kill people." It's a take on a common phrase used for those against increased gun control. Stop for a minute and think if that was our excuse whenever someone was killed by a car. In this space I usually try to stay away from personal opinion on issues and just promote men doing good things for other men (and women, and children, and animals). But with the recent escalation of gun-related tragedies in our country (and me taking a few risks  to be more personal here) I finally think silence is no longer an option. So, back to that thought. There was a time when we looked the other way for issues with cars whether it be drunk driving, poor quality control, safety standards and so on. Yet at some point we  realized we needed change, we needed to start proactively controlling and penalizing certain things with cars. We created laws for inappropriate operation such as using drugs, now even texting. We ban people from using then, even o
Post a Comment
Read more

There's Great Then There's The Greatest 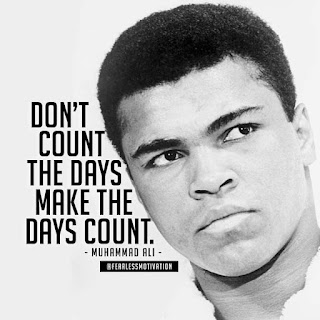 Ali truly made his days count Athlete, advocate, activist, altruist, Ali. The Greatest. At a time when hyperbole is far too common, especially in written (social media) communication, we just lost one of the few who not only deserved, but demanded superlatives and nothing said about him was exaggerated. Muhammad Ali may have passed form this world last night at the age of 74, but his presence and impact will never be lost. Every generation has its sports heroes, and each argues over whether theirs is better than the ones before or after, but though Ali's days as an athlete may have been too early for me to consider to be of 'my' generation, his work after the ring continued to create inspiration and aspiration.
Post a Comment
Read more
More posts