Showing posts from June, 2011
Show all

What else do you call compost made by a priest for fundraising? OK, he calls it Father Dom's Duck Doo, but I'll give him a pass. After all Paul Newman gave him the name. Besides, I have a soft spot for the man in question - Father Domenic Roscioli - as I have a personal connection to him. You see Father Dom (a Steve Carrel look-alike), adopted a very special dog from me and my wife. She was a very shy dog, one we spent a lot of time rehabbing, and we thought we would never find someone that could give her a safe and loving home as we gave her. Until Father Dom came to meet her. He was patient and loving and in an hour, yes he took an hour to meet her, Father Dom had finally won her over, and in so doing won me over.
Post a Comment
Read more

- June 22, 2011
Or is it Go Go Green? This year MillerCoors and Summerfest are trying to green up the fest. If you pledge to be green (which they never really say they think entails - hoping they add more info) you can win backstage passes to Goo Goo Dolls July 8. Make your pledge here  by tomorrow June 23.
Post a Comment
Read more

The University of California recently did a study of NBA games and found that the teams whose players touch each other the most - whether a high five, chest bump or the age-old butt-slap - win the most. The  Wall Street Journal  reports that ABC analyzed their broadcasts of the NBA Finals in a similar manner and found that the Mavericks are a touchy-feely team while the Heat are aloof and individual with almost half the 'touches' - interestingly the Mavericks now lead the series 3-2. Who knows if in the end the Mavericks will win - the Heat having 2 home games to come back - but the overall numbers are telling with the regular season winningest teams being the most tactile. Maybe we men need to try this more outside of sports. Prepare or or celebrate the big sell at work with high fives, chest bumps, and slaps. It might get a little awkward in mixed company though - maybe stick with high fives and hugs.
Post a Comment
Read more

BOGO - Buy One GIVE One?

- June 09, 2011
TOMS shoes  was one of the pioneers of a business model that is truly inspiring. In a twist on the term BOGO, their version means 'Buy One  Give  One', meaning that for every pair of shoes bought, they give a pair to a child in need. Now personally, the men's shoe styles themselves are a little hard to swallow - they all look like variations of ballet shoes for some reason, maybe they look better on -  with only a few that I would even think of wearing. But the idea is amazing, and now that have expanded the program. They now sell  sunglasses  and for each pair bought they give  a pair of eyewear to the needy. They are classic styles much better looking and wearable than the shoes.
Post a Comment
Read more

- June 09, 2011
I am not a big baseball fan, only following the home team as a sports homer in general, but this story caught my eye. With their 33rd round pick - 33 rounds?, again not a baseball follower but 33 ??? - drafted a player that will never play baseball - you see, he is paralyzed. Johnathan Taylor, team mate of Zach Cone who the Rangers drafted in the 2nd-round, was paralyzed in an outfield collision. He likely will never walk again - though he is in therapy - and definitely will not play ball again. The Rangers gave him the honor of going to the team his friend Cone went to - and many of us hope that he will get a job with them maybe in the office or coaching somehow, if the Rangers made this move I can see them being so big as to take that next step. Good pick, Rangers, and Great Play.
Post a Comment
Read more

Mr. Rogers Was A Great Man 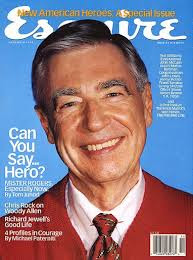 I have been saving this one for a slow period. June will kick up in he next two weeks with the official weeks of Great Outdoors Month and Men's Health Month, but the first week here is light on men's activities. We all know that Mr. Rogers was a 'good neighbor' on his show - showing kids how to live well - but an article on Fred Rogers lists  15 reasons he was good  off-camera as well. All of them are examples of him being Compassionate, Decisive, Enterprising, and Sincere. Esquire also did an article on him which is currently posted  here . In addition to being just an all around good guy - tolerant, color-blind literally and figuratively - he was also a perfectionist about his show and even his health. Twice he spoke to congress , once about about public television and also about the ability to record on the VCR, both times turning around the plans with just his words. Personally, being on the quieter side myself, I learned a big lesson from Mr. Rogers - that y
Post a Comment
Read more
More posts