Showing posts from September, 2015
Show all

It must be tough being a celebrity with all sorts of expectations and traps by their fans and the public, I myself can be pretty judgmental, though here at GMM we try to only promote the positive, not dwell on the negative. Especially when it concerns promoting values or opinions, celebrities - whether athlete, musician, or actor - have to worry if they are turning away fans of differing opinions, you also have to be careful when they start a charity as often they can turn out to be less than well-run. For the most part though, medical causes are a safe bet. Last night, I had the opportunity to be inspired by someone doing it right. Mike Peters, former lead singer of 80's band The Alarm , played at Shank Hall in an intimate one-man show focusing on The Alarm's second studio album Strength. I could review how cool the show was to see him up close and personal, acoustic with minimal back track assistance, the fact he played harmonica or a bass drum at the same time as the gui
Post a Comment
Read more 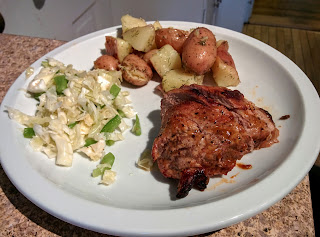 The Buffalo pork tenderloin with dill potatoes and homemade slaw that started the movement By now most have heard of Meatless Monday, which may seem new but goes back to war times along with Wheatless Wednesdays. Back then they were conservation efforts to reduce consumption, but today MM has been 'reintroduced as a public health awareness campaign, Meatless Monday addresses the prevalence of preventable illnesses associated with excessive meat consumption'. Well, I came up with a new weekly night to share and reduce food waste and also provide healthy food to others. While participating in social media shenanigans I invented a new program that was meant as a joke, turned into a half-joke and now may be something I would seriously pursue and encourage others to do: Third-Wheel Thursdays, or maybe Three's Company Thursdays - you tell me which rings better and I'll run with it. The concept is for a household of less than 3 people (yes that us 2 or 1) to invite oth
Post a Comment
Read more
More posts