- May 15, 2013
We love to boast about Milwaukee achievements, our #MKEPride, especially when they relate to aspects of Wellness or manliness or hopefully both - and so we must continue the tradition with a story recently posted on the Menuism blog. So what did we excel at this time? It's Milwaukee so it must be beer, or brats, maybe cheese. No, this time its burgers, and not the meaty variety like those in the famed Food Wars segment that pitted AJ Bombers vs. Sobelman's. Surprisingly, well maybe not to those veg eaters out there in Milwaukee who know we have some great places for them to eat, its for meatless, i.e. vegetarian, burgers. 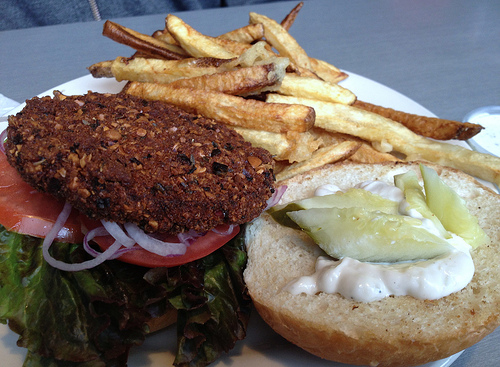 Among the list of 'manly' foods, most of which are meaty (there's a pun in there), burgers rank right up there with steaks, sausages from dogs to brats, wings, and chili. Fortunately for those looking for options due to health or philosophical reasons, burgers are one of the easiest to replace. Sure it took a while and there are still some stinkers out there, especially in the grocery-store options, but increasingly there are good even great options both eating out and in. Restaurants are getting especially good at making good replacements if they do it from scratch using anything from mushrooms (whole or ground like beef), to beans, or even nuts (as I talked about here nuts are a good replacement for lots of things).

Menuism recently did a blog post on 5 Meatless Burgers Worth Trying, the beast one from five types inlcuding soy, hazelnut, mushroom, tempeh, and combination. Milwaukee restaurants were called out for two of them: The Comet Cafe and The Eatery on Farwell.

The Eatery on Farwell was named for Mushroom Burger - the “Ratatouille Burger” consists of a grilled Portobello stuffed with roasted veggies and topped with vegan mozzarella cheese and garlic aioli.

To get even one on the list would be pretty good, but we had two out of only five in a contest I would thought dominated by the East and West coasts, but once again we see that Milwaukee and the Middle Coast should never be underestimated. Both also made this list of 11 Best Veggie Burgers by VegNews.

One category they missed was bean burgers, black bean burgers are especially common usually with a southwestern or Mexican flavor profile. To me that has always seemed a god way to approach the whole 'replacement' thing. Instead of trying to duplicate the original recipe, you can give a nod to its flavor and format while branching out. The Eatery's 'burger' is another good example of that, they embraced the mushroom thing and bypassed the standard ketchup, etc. toppings of a standard burger with ones that go with mushrooms. Even Comet's uses thousand island dressing instead of ketchup.

One nice thing with meatless burgers is that once on the bun with the condiments, they look like any other burger.
Eat Great milwaukee vegetarian