- June 05, 2013
To me the definition of a hero is no only one who helps, but inspires, and this is especially true of superheroes. In the world of comics, there are superpowered characters - ones that can do things we normal people can't , and heroes - the 'good-guys' who give an example of how to act even in the middle of conflict whether from an enemy or just regular life. It seems rarer these days for the two to intersect with antiheroes, vigilantes, being more popular it seems. I get it, the tales of  Dudley Do-Right type can never be as interesting as those of darker characters, but there is always a place for them, especially when it comes to children. That is why I am so happy to see the involvement of characters we traditionally see as straight up superheroes in making the lives of sick children a little brighter.

Just today I saw two stories of superheroes being used to cheer up children in hospitals.

First, Good Morning America, had a story on window washers dressing up as superheroes when they clean the windows of a children's hospital. C. S. Mott Children's Hospital in Michigan just did it over the weekend, but it seems to be a trend that has happened before in the US, and actually started in the UK. Check out the joy of the kid above seeing Spider-Man outside his window. You have to hand it to the washers, whether their idea or the hospitals, dressing up must be fun, but not too easy either. Adding a mask, muscles, or even a cape can't make their job easier. 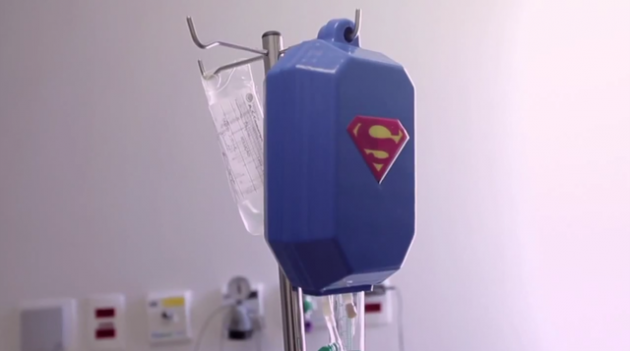 Then I just saw a story on GeekExchange of a hospital in Brazil, the A.C. Camargo Cancer Center, teaming up with DC Comics (via their parent company Warner Brothers via their shared ad agency, JWT), to do their own part to make hospital visits easier. They created their own “super formula,” a DC-themed IV-bag cover to help ease kids into getting treated for cancer. The main idea is to cover up the IV and make , but calling it a "super formula" may help the kids think it will help more than it would naturally. The placebo effect can be real and if the kids think it's is a special formula, hey, who are we to keep them from believing?

A video of the initiative can be seen below.


Let's hope both these projects catch on and superheroes continue to make the lives of sick children better and brighter. After all, attitude can be such a big part of recovery, so anything we can do to make them happy and motivated helps.
children comics entertainment health hero inspiration