A Harley 110th Guide To Milwaukee By A Rider For Riders

- August 27, 2013
Hail Fellow Riders, Well Met! As a native and lifelong Greater Milwaukeean and a rider and HOG member myself, I would like to welcome you to our fine city for the Harley Davidson 110th Anniversary celebration whether it is your first time here or not. Since we are known for an inferiority complex, let me take this opportunity to sing the praises of tour fine city to all you visiting and cue you in on some of the best of the best here from one biker to another. Make sure you take some time out from the festivities organized by Harley and the dealerships to check out the rest of what we have to offer.


I can't say it much better than Bill Davidson, the great-grandson of one of the founders of Harley-Davidson, himself in his Love Letter to Milwaukee:


The people and industry here in Milwaukee represent all the qualities necessary to help build a brand like Harley-Davidson - one focused on family, pride, strong work ethic and camaraderie. Milwaukeeans have an unmatched creative and fun loving spirit, and they possess the skills and passion to produce some of the best products in the world.

Let me just add this: Milwaukee is much more than it seems and we let on. Sure our roots are a blue-collar rust-belt town, and that makes it a perfect place for Harley and for its riders to visit, but most big cities (and we are one even if our citizens don't always think we are - we are right behind Boston and no one would argue their standing) start out as a workers town and move on from there, or as we have seen in Detroit fail if they don't. Don't believe what you may have heard - we have evolved, but done it while keeping our hard-working, honest, friendly roots. We have venues for great food, music, art, pretty much any culture you want. And as always that culture is grounded and rooted by our port and manufacturing origins so that means it will appeal to all of you visitors.

I've already created some lists on our MKE Pride page and many man-friendly places on the Goods & Services page, but here is a list by a rider (namely me) for riders. 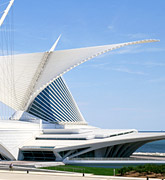 While you are down at our Summerfest grounds, properly the Henry Maier Festival Park, where the bulk of the festivities take place, head north a few blocks to the Milwaukee Art Museum with the famous Quadracci Pavilion - the sculptural, postmodern addition designed by Spanish architect Santiago Calatrava that features the the Burke Brise Soleil, a moveable sunscreen with a 217-foot wingspan that unfolds and folds twice daily and is the new icon of the Milwaukee skyline. The museum was shrewd enough to time a tattoo exhibit at the same time as the anniversary. It also is home to the War Memorial Center. Head north a little more to the lakefront where you can visit Veteran's Park, one of our Gold-Medal Award winning county parks, situated directly on the shore of Lake Michigan, the park is busy on spring and summer weekends, and has also played host to various events throughout the years including past and current Harley anniversary events. Keep going as far as you want up Lake Drive for a scenic ride, but you may want to stop at the Lakefront Colectivo Coffee cafe situated in and old Cream City brick (a special brick made here only in Milwaukee that give our buildings that uniform cream color) Flushing Station built in 1888 with good, strong coffee to get you going in the morning after the previous night's festivities. Past that is the Northpoint Custard Stand where you can get a great burger and custard right on the beach. Keep going north along the lake past North Ave where one of the street festivals is to Capital Drive and go west and you will come to Estabrook Park and its Beer Garden - one of the most authentic ones this side of the Atlantic through a partnership with the original Hofbrauhaus of Germany. 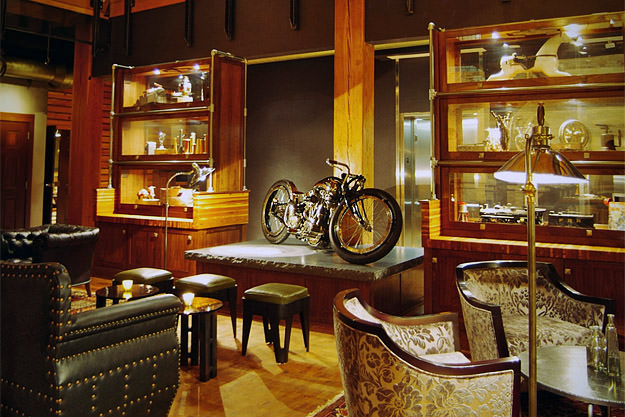 West of the festival grounds you will most likely visit the Harley-Davidson Museum, while there make sure you walk over to the Iron Horse Hotel which is a boutique hotel designed for bikers, and one of my favorite places in town, then cross the street to the west to visit Great Lakes Distillery for some whiskey from a place filled with the spirit of Milwaukee. Those two places partnered to make a whiskey of their own to replace Jim Beam in the Iron Horse bar after the whiskey giant released a commercial showing Wisconsin-native Willem Defoe in two ‘parallel’ lives, one of fame after choosing a bus to New York City and the other slightly less glamorous, a life led after choosing Milwaukee. Now that's some example of Milwaukee's steel heart. Nearby is Milwaukee Brewing Company - speaking of breweries, we are known as 'Brew City' for a reason. Besides being home to Miller who shares an anniversary and is a sponsor of the 110th and formerly to Pabst, Schlitz and Blatz, we have one of the best craft brewing communities around including Lakefront Brewery, Sprecher Brewery, and Big Bay Brewing. It may sound silly, but stop off for some ice cream as well - though we are known for our frozen custard, perhaps the best thing here is the Purple Door Ice Cream whiskey ice cream, don't take my word for it - try it yourself.

Don't even get me started on bars - its 'Brew City', pick one

If you need a little grooming and styling while here, head south to the Bay View neighborhood and make check out Stag Barbershop for a cut or even better a shave by the skilled ladies there - there is nothing like an old-fashioned straight razor shave with an ice cold Pabst in hand. On your way back downtown stop by The Brass Rooster for the finest in men's hats from traditional to contemporary, you can even order a custom made hat. Tattoos are part of the style of many bikers, and while we have many great parlors in Milwaukee, if you want to get one while here down in Bay View is Solid State Tattoo, whose owner has a passion for old-school tattoos and provided all of the flash on display at the art museum's previously mentioned exhibit.

Of course while you are here you will need to eat, and Milwaukee will not disappoint. There are almost too many places to list, but here are some places that should appeal to the Harley riders:
There are many great options here in town, many personal favorites I have left off, but these are all the places I think combine the atmosphere and character that Harley riders will like with the tops in quality of service and experience.

We know you are here for the 110th anniversary at the lakefront and the street and dealership festivals, but we hope you take some time out to explore what else Milwaukee has to offer - which is a lot.


Welcome to Milwaukee and we hope to see you back, anniversary or no!
milwaukee motorcycle