Kareem Tells How To Turn Boys To Men 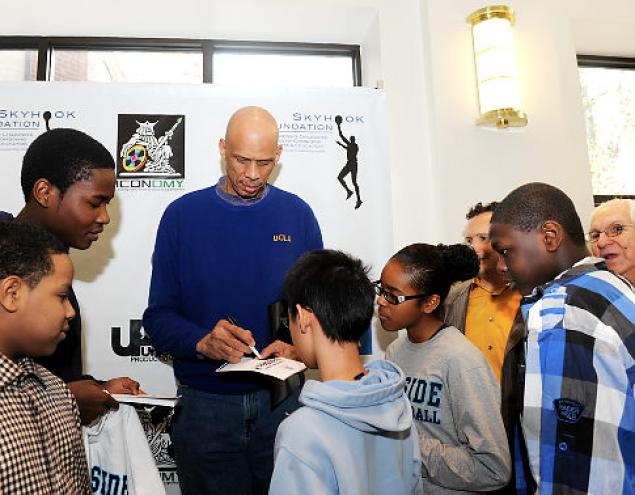 In an Esquire blog post, the esteemed Kareem Abdul-Jabbar presents 20 Things Boys Can Do To Become Men. Unlike what you may expect from today's athletes, his post is a well-thought out and truly valid list. I recommend it highly for anyone trying to be a Great Man, though points for what boys can and should do it is what we all should do. If you have boys yourself share it with them.

You can read his entire post with all 20 points and his enlightened discussion of them, but seeing as they all support our values in the code: A Great Man man strives to be Compassionate, Decisive, Enterprising, and Sincere, I thought I would list them here under the value I think they help reinforce.


The virtue of Compassion

9. Mind your manners.  'people appreciate the effort and respect shown them. In turn, they will show you respect.'
10. Be patient in love.  'The worst thing you can do in looking to find a significant other is to try to change yourself into something you’re not just because you think that’s what girls are looking for.'


The virtue of Enterprise

4. Play a team sport.  'playing on a team teaches you how to interact with others, adjust to various personalities, work together as a team, be generous.'
6. Fight your fear of the unknown.  'a Yale study...showed that when those people immediately rejected the new evidence, their brains released an addictive chemical that made them feel good.
8. Be politically aware.  'Part of being a man is to be informed so you are prepared to take an active and responsible place in your society.'
11. Stay fit.  'the body is like any machine: It may run great when it's new, but after years of neglect it will slow down, and eventually break down.'
13. Get organized. 'men have less time to accomplish more. In order to do all the things they want, they have to be organized'
16. Question authority.  'To be your own man, you will have to make up your own mind about things.'

The virtue of Decision

3. Avoid a physical fight—if you can.  'when an argument turns into a fight, it’s because the one starting the fight realizes he isn’t smart enough to win verbally'
5. Choose your friends for the right reasons.  '...bad friends can actually be the cause some of those tough parts.' (Boy a lot of pro athletes need to pay heed to this one.)
7. Listen to advice.  Such as to Kareem's.
14. Find heroes to copy.  Like Kareem.
15. Be independent.  'The sooner you start doing things for yourself, the sooner you will have the respect of others—and of yourself.'
17. Get smart.  'A man knows how to educate himself in pursuit of truth.'
19. Pay attention to the short run….  'don’t let planning for your future consume your present. Do some things just because they’re fun now.'

The virtue of Sincerity

1. Learn who you are as an individual.  ‘Figuring out who you are, what you care about, what you believe in, and what you stand for is the most important—and most difficult—challenge of becoming a man.’
2. Stand up for yourself and your beliefs.  He uses perhaps my favorite all-time Be Great quote: "The only thing necessary for the triumph of evil is for good men to do nothing."
12. Never, never do something on a dare.  'The person who refuses a dare displays intelligence, courage, and independence'
18. Express yourself.  '…try on new identities to see which ones fit you best. Sure, you might have to endure some taunts, but it’s more important that you figure out who you are than caring what those shut-ins of the mind think.' (I certainly did and I think - no know - it made me who I am today)


He wraps it all up with:
20. …But keep your eye on the long run. 'Know who you are, what you stand for, watch for any assaults on your principles, but always be open to change if the evidence warrants it.' That itself is kind of the entire code in a nutshell.
Great Words hero inspiration manners mentor quotes