Gamers Solve 10 Year HIV Structure In As Many Days

- October 16, 2013
We've said it before, but there's more proof - gamers are Great Mean too. In a novel form of crowdsourcing - using usually free services of many, often hundreds or thousands, people typically via an online tool to solve problems - people playing a game have plotted the intricate structure of the M-PMV retroviral protein, an enzyme that plays a key role in the development of a virus similar to HIV in ten days when scientists have been unable to do it in a decade. 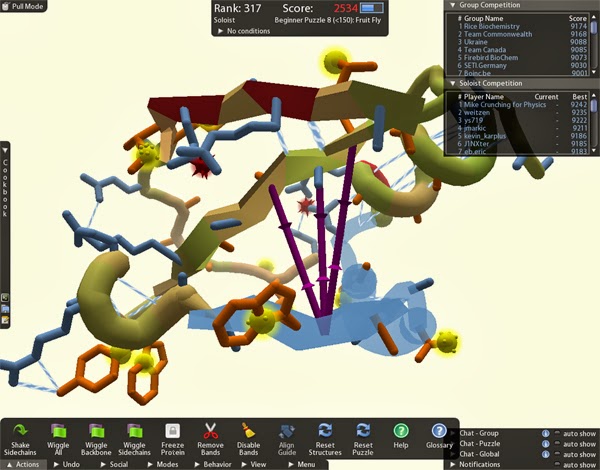 Using the game Foldit,  a revolutionary new computer game enabling players to contribute to important scientific research, players can manipulate virtual molecular structures trying to make the best possible structure for a protein. You can read more about the game and how it actually helps science at their website. The cool thing here is that there was an actual life altering result made possible by the


Though computers had been used before, they lack the spatial recognition and creativity of human beings and the code could not be cracked. In what was essentially a last-ditch effort by Firas Khatib, a biochemist at the University of Washington, they posted the HIV protein on Foldit and let gamers have at it, and oh did they, cracking it in ten days.


"This is one small piece of the puzzle in being able to help with AIDS," Firas Khatib, a biochemist at the University of Washington, told me. Khatib is the lead author of a research paper on the project, published today by Nature Structural & Molecular Biology.

The cool thing is that this can be used in the future. In generic and specific instances, games like Foldit - and other crowdsourcing tools - can help us solve many problems that we could never do before with a few people, even armed with the most powerful computers, could never do before.