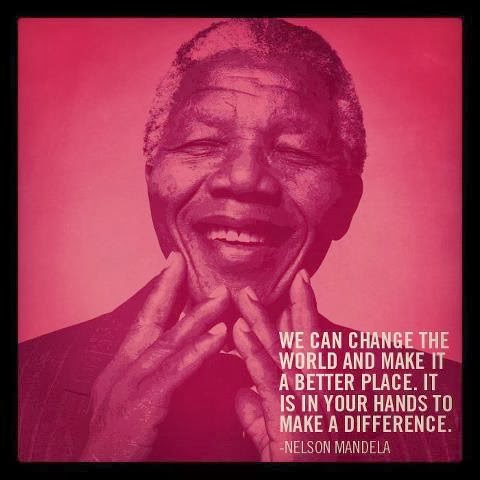 'A good head and a good heart are always a formidable combination.' Those words are but a few of many wise ones to have come from one of the greatest leaders I have and likely will see during my lifetime, a man whose soul just moved on, Nelson Mandela. Those words, of all his, I picked for this story since the are among those quotes that embody what to me Greater Milwaukee Men is about, the Greater Men part, about being good, trying to be great, in all areas.


As a member of Generation X, I grew up with the story of Mandela as prisoner, the movement to release him, and his eventual freedom. He was an icon to the icons of my youth, few historical figures especially ones of our age have inspired as many songs about them, Mandela inspiring artists including The Specials, Joe Strummer, Bono and Dave Stewart as well as many others. Below is a song the last three did together bringing together artists from The Clash, U2, and the Eurythmics:


Though there had been icons of pop culture before that addressed human rights and other movements, the 80's, my formative teen years, saw the blooming of pop culture as a voice. AIDS, hunger, war, and many other interests could be seen everywhere in bold letters on shirts and in the songs and videos super-super-groups of singers on either side of the pond. But his story stood out to me, maybe simply because if the timing (he was released the same year I turned 20), maybe because he inspired my personal icons, or maybe he was there to inspire to become the man I hope I am and wish to always work towards being. It seems I was not the only one, since this man from South Africa was able to inspire the rest of the world.

While music is said to be the universal language, there is at least one other thing that can unite people almost the same way, and Mandela understood and used it: Sports.

I won't be the first or the last to say it, there is already a great piece on it in the NY Times and the major sports outlets have and will continue to have stories on it, but Mandela was a master at using the inspiration of sports to heal and inspire his nation. Here in the states we have witnessed how sports can heal after disasters both natural and man-made, such as after 911 and Katrina, but Mandela was able to harness the power of sports for the greater good in ways no one else could from the '95 rugby World Cup win on home soil to the '96 and '03 soccer and cricket cups to the 2010 FIFA World Cup famously remembered for the sound of vuvuzelas each time the recognition and along with it the pride of South Africa was raised in the eyes of the world and perhaps more importantly its people.

“Sport,” he said, “has the power to change the world. It has the power to unite people in a way that little else does. It speaks to youth in a language they understand. Sport can create hope where once there was only despair.”

The story of his use of sport was so compelling the 2009 movie Invictus was filmed about the historic run to the 1995 Rugby World Cup and Mandela's role in inspiring the team and with it his nation, shortly after he was released from prison and subsequently winning the first democratic election in the nation's history. At a time when the nation was a teetering point he helped it move forward to unity instead of backward into more, possibly worse, discourse between its people.

Though his death was not shocking, he was 95 - a remarkably long life considering what he endured including 27 years in prison - it is still a shock to lose someone of his prominence. But let us not mourn his passing, instead let us celebrate his life and the Great Man he was and serves as an example for us to strive for.

Mandela said, “ As we let our own light shine, we unconsciously give other people permission to do the same.” His light shone ever so brightly and gave others the ability to do the same.
courage Great Words