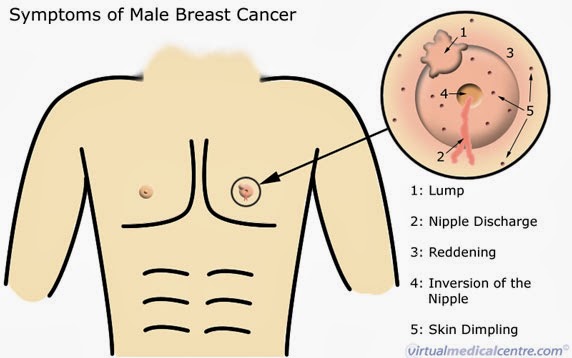 Milwaukee TV station TMJ4 recently did a story on 'A candid look at male breast cancer' covering 620AM radio personality Jim Peck's personal encounter with a breast cancer scare. We always try to increase men's health awareness, and the men's cancers always take a prominent place in awareness and fundraising efforts, but this story is different. Not only is it an atypical cancer, usually thought of only for women, but it is personal since I had a breast cancer scare myself.

Wait, we don't have breasts so how can we get breast cancer you ask? Well, here is what Cancer Treatment Centers of America reports:


Men have breast tissue that develops in the same way as breast tissue in women, and is susceptible to cancer cells in the same way. In girls, hormonal changes at puberty cause female breasts to grow. In boys, hormones made by the testicles prevent the breasts from growing. Breast cancer in men is uncommon because male breasts have ducts that are less developed and are not exposed to growth-promoting female hormones.

Because of the fact we have less developed breasts, but still have them, male breast cancer represents less than 1% of all breast cancer cases, but we can still get it. Jim's mammogram came up negative, it doesn't state what follow up was done for him, but they mention another man who was diagnosed with breast cancer.


Larry Norman, a deacon for the Archdiocese of Milwaukee, was diagnosed with breast cancer in 2004. The closest thing to a ‘standard of care’ for males with breast cancer is to have the mass removed by what's called a ‘modified radical mastectomy’. Larry had the procedure done, and opted to take a drug called Temoxafine.

Thankfully my story was somewhere in between Jim and Larry's. I was in grade school yet when I noticed a lump forming in my chest, behind my left nipple. As a young boy it was embarrassing that I seemed to be forming a breast, but odd that it was just one side. Gym class and showers weren't fun as I tried to hide it under my arm for a while. Eventually I let my parents know and we saw the doctor. Back then no initial tests were done but surgery was scheduled right away. They performed a mastectomy, removing not only the growth but also a portion of muscle with it. To this day I still have a depression in my left chest where muscle was cut out. Luckily tests on the growth that was removed came back negative, it was benign, and over 30 years later nothing else has come out of it. But had it been cancer, and had we waited, who knows...

As with all illnesses and health issues, the earlier is always better but as we know men are not known for following up on our health, especially when it may be 'embarrassing'. But how or why should it be embarrassing when you have no control over it? And even if you could, like your weight, isn't it more embarrassing to 'let yourself go' than to take care of yourself? This is just another example of why we need to be more proactive with our health and get ourselves checked out.
cancer health