- February 22, 2015
As a musician, being on the road must get lonely. Until you are a big enough star to afford those gigantic buses, and even with them, you often have to leave behind not only family and friends, but pets as well.

Hozier, a rising star in the music industry with his Grammy-nominated song Take Me To Church, was in town for a concert at The Riverside Theater last night. It turns out he is an animal lover who, along with his band and crew, miss their own pets. They requested from the Milwaukee Area Domestic Animal Control Commission (MADACC) that they bring by shelter pets for them to share love with before the show and afterwards rewarded MADACC with a donation.
MADACC is Milwaukee's animal control center that rescues and assures safe, temporary shelter, veterinary and humane care for nearly 13,000 stray, unwanted, abandoned, mistreated and injured animals each year. 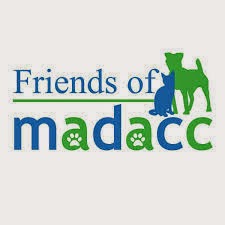 According to MADACC volunteer and Friends' group president Laura Nigbur, volunteers spent all Saturday afternoon and evening at The Riverside with pups from MADACC. They were requested by Hozier, the band members, and crew since they all miss their pups back home and wanted to get a little love time before the show. MADACC took 5 dogs before the show and then went back with Linus who is the little pittie girl pictured with Hozier above. They donated $500 in dog food and then after having little girl Linus in their dressing rooms for 3 hours, and falling in love, the band took up a collection and made a donation to Friends of MADACC. Riverside. But it gets even better. Hozier also signed a shirt and poster for MADACC to auction off as one of the many items at their 2015 Soiree for Strays.

I had already been becoming a big fan of Hozier from his music and what I knew of him from various stories, but this combination of animal love and supporting the local animal welfare agency that I support as well makes me respect him as a man and I am happy to call Hozier himself a 'Friend' of MADACC and an honorary 'Greater Milwaukee Man'.