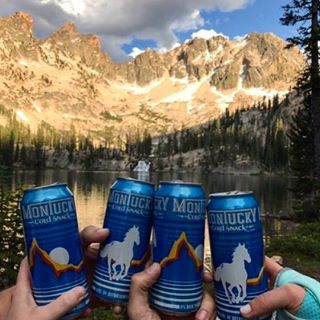 I was just at one of my favorite Milwaukee bars, well favorite anywhere,  Boone & Crocket, drinking a brew I had never seen or tried before, Montucky Cold Snack, when I noticed something cool about the can. No not its temp, but the fact it states that 8% of proceeds to local charities.

So, full disclosure, this blog is about Milwaukee and Wisconsin and in this case 'local' doesn't mean here - it means Montana, home of Montucky, and some surrounding states. What makes MCS 'local' to us here is that it is brewed in LaCrosse, WI. So maybe, now that it's distributed & served here, local support could include our fine state.

I am sure first thing you are asking is - is it any good? Well today was hot, unseasonably hot, crazy hot, and it was a refreshing beer. MCS is considered an American Pale Lager, meaning a lager brewed in America without any non-barley adjuncts (like rice or corn used by many 'light' beers), and usually means it has a higher hop profile than pilsners and lagers (like Pale Ales). So it won't be as light (in calories) as a light beer, but then it won't be as light in flavor either. It is pretty light though, lacking the sickly sweetness of some macrobrews and adding the punch of a bit more hops for a crisp, clean palette. In short, I dig it and could drink my fair share especially on a hot day like today. 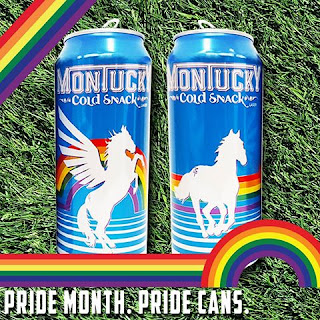 Next most important beer brand feature. How cool is it? Pretty damn cool. I mean check out those cans, the logo, the colors. All very seventies. Perfect for a trucker hat. Check out their shop for other swag like patches and headbands.

But of course for us here at GMM, the ultimate feature is the socially responsible aspect. After raising and donating $38,000 in their first years to local charities now they have teamed up with InPact Now to manage the charitable aspect. Basically MCS picks charities it supports, then puts it in the hands of its customers to pick from those charities to send dollars to. Pretty cool. I also noticed in looking their stuff up that they released special Pride cans during Pride month - them supporting the LGBTQ community is special to me. And look at those cans - I mean come on man, Unicorns & Pegasi, & Rainbows!

I'll be looking for these at any establishment in town from now on, to drink and donate at the same time. Here's a list of spots near Milwaukee that have it.
beer charity local