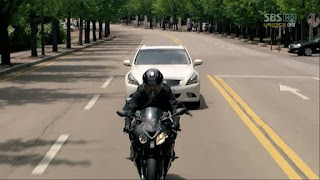 A friend recently posted an article on social media that got my attention for various reasons. The Adopt a rider (motorcyclist) concept in this RevZilla article speaks to me as a motorcyclist myself but also a rider, and also the concept works for other cases as well and all tie into my hope that we all could adopt the Golden Rule when driving. "Everyone' knows the Golden Rule, here's my take on it when driving: ask yourself "what if I was in their shoes?"

A little conscientiousness goes a long way, and when on the road it can help everyone. If we all looked around us and treated other people on the road the way we would want to be treated if in their situation it would reduce stress, even travel times.

In the Adopt a rider concept in the article, as a driver (who may also ride) we are asked to look out for motorcyclists and get behind them, literally and figuratively, to assist them in traffic. This is something that thinking back I do myself, and not just for motorcyclist but for bicyclists and even buses. Just yesterday I found myself in that odd spot next to a bus for blocks, weaving in and out of the curb and traffic. As I almost always do, or just always, I know the bus and the people on it need to keep on schedule so I let it in each time not knowing if anyone behind would be as nice to the bus. When I later was able to pass the bus I happened to notice it was a friend driving it, sure seemed even nicer then but I did it regardless.

Many articles like this start and stop with 'Don't be a dick." That's a nice start, but why can't we go a step further and actively try to be nice when driving? It may take you a minute, or a few, longer to here and there let someone in your lane, to wave on someone turning in heavy backed-up traffic, or sit behind someone on a bike until they can make a turn or get out of traffic at the next block, but overall if more people did this it could actually reduce your time. The biggest impact to traffic flow is sudden stops and of course actual accidents. But if we all tried proactively to let traffic flow steadily the less of those scenarios we would have. If someone ahead of you in traffic was attentive and nice, they might not have to stop all of a sudden or get into an accident and that could save you time. Imagine if we all did that.

Again think to yourself if you were that motorcycle, or bicycle, or car how would you want to be treated? If you were trying to turn right into the lane of backed up traffic, wouldn't you want someone to let you in? Or if crossing to turn left keep an eye out for you and motion when its clear to cross both lanes? If you were on a bike and the lane suddenly was filled with parked cars wouldn't you want the car next to you to notice and ease off and let you in? Here's something: the zipper merge concept works everywhere not just in officially noted spots. If everyone eased off and just made room and let cars in, traffic would keep moving and you wouldn't have the start and stop when someone has to just try to insert themselves into traffic. Sure, the other car may be going farther up that you think is appropriate but just let them in. If you don't they might go another car up and make that car slam on the brakes or cause an accident and back you up anyway.

I get it, this is often in rush hour and you have someplace to be. So start earlier and give yourself a few extra minutes. You probably should anyway in case real traffic issues do occur. If you are late its at least in some part your problem not the other people in traffic.

Sure, Milwaukee has been a shit show lately with various construction projects, but that's even more reason to be nice to each other. We all are frustrated and you could easily be the person in the same spot as someone else. The next months will have lots of new stuff to watch for: bridges will reopen, the streetcar will launch, the Harley-Davidson anniversary will be here with tens of thousands of bikes.

Here are a bunch of random 'tips' for being a conscientious driver AKA my pet peeves:


I could go on, on a 15 minute commute I probably see minimum 5 up to 10 etiquette and/or legal infractions on a daily basis.

The above are really all common sense to me, but in the end it comes down to people being selfish I think. Its not that they don't know the right thing to do, they just don't care. Drivers want to do what, when, they want regardless of how it might impact others on the road.

Let's all try to make it better for others and in turn ourselves by all trying to be a little nicer to others - on the road and everywhere else.