Heview: Purple Door's Whiskey Ice Cream Should Be In Your Freezer 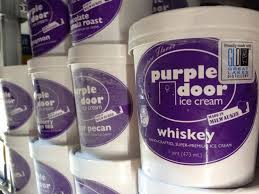 I know right. Ice cream for a man's product review? I counter with: whiskey. Milwaukee's own Purple Door Ice Cream is not only an amazing product, but they do everything right in making their ice cream to be truly considered a Great Men's business.

Ice cream may not be up there with the typical man food like steak & potatoes and beer, but many brands have flavors that are still appealing to the manliest of men like salted caramel or coffee. Purple Door takes the cake though with their whiskey-flavored ice cream made with another Milwaukee product - Great Lakes Distillery's Kinnickinnic Whiskey. That's double-Milwaukee which means double the goodness.


We'll get to the whiskey flavor in a minute, but let's consider Purple Door in general. Their ice cream - any flavor - is the best I have ever had, but you also pay for the goodness, it's not cheap. But then the good things rarely are. You will pay as much for a pint as you would a quart of even other high end ice creams. On the plus side, it is so rich and good one scoop will satisfy. Their basic vanilla is an ice cream that can rival the best frozen custard in town in richness of texture and taste (if you aren't from Wisconsin and don't have frozen custard - well you don't know what you are missing). This isn't ice cream you put toppings on - no hot fudge, caramel, or anything please - you will miss out on the ice cream itself, especially if you get a flavored ice cream. Putting it on something else is another story - pair an Elegant Farmer apple pie in a bag with vanilla, cinnamon, or salted caramel and you have a perfect Wisconsin fall dessert. Speaking of those flavors, we may be touting whiskey as the flavor for men, but their cinnamon, salted caramel, and Guatemala Roast made from Stone Creek Coffee are all right up there with whiskey as not your typical kid's ice cream flavor.

You may have noticed a pattern in the ice cream ingredients - made in Milwaukee. Well, aside from the quality of their product the way they make it is to be admired. Purple Door Ice Cream, which they call a super-premium, hand crafted artisanal product is owned and operated by Lauren and Steve Schultz, owner who have applied their background in education to the kitchen to create the best product they can. Purple Door ice cream is hand-crafted in small batches using quality (14% butterfat milk and cream), local ingredients which includes cream from Wisconsin dairies, as well as the flavorings like whiskey and coffee and other flavors like their raspberry green tea which uses Rishi tea. They are committed to social and environmental responsibility (i.e. Well-Met). The make their product in Milwaukee's Clock Shadow Building, a radical green building that focuses on renewable resources and reusable energy such as a deep-well geothermal heating and cooling system and a 3,000-square foot urban farm on the building's rooftop. On the socially responsible side, Purple Door also has a community initiative, Milk for Milwaukee, which provides fresh milk to area homeless shelters.

In addition to their regular flavors, Purple Door does special flavors which range from regular to crazy like basil or chai with pink peppercorn - they just made garlic ice cream for Braise's Garlic Fest. Whiskey used to be considered a seasonal or special flavor, but thankfully they added it to the list of flavors regularly available in grocer's freezers so we can get it all the time.

So how about the whiskey flavor? It's almost like having a frozen cocktail, without the alcohol - just the taste. Almost like a frozen Brandy or Whiskey Alexander only its with freakin Purple Door ice cream versus as a slush or ice cream blended in. The whiskey could have easily overpower the ice cream, but it nestles right in with the cream for a perfect balance of flavors.

This is the best ice cream I have ever had - until I get a chance to try their Whiskey Bacon.