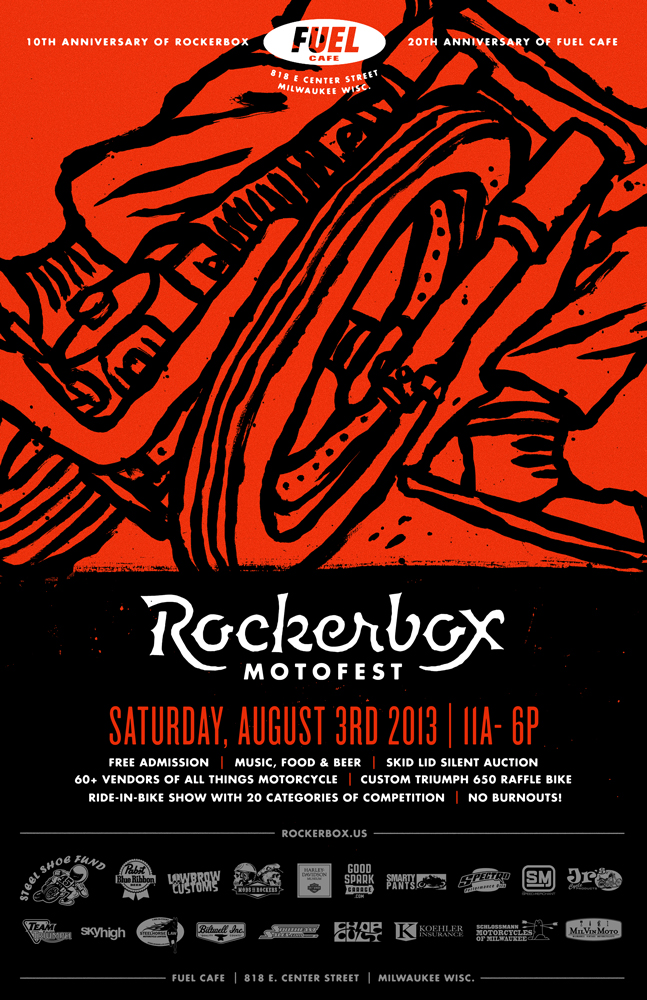 Rockerbox, the 'premier Wisconsin motorcycle show and street party', is celebrating its 10 year anniversary this year on Saturday August 3rd, 2013 from 11 a.m.- 6 p.m. in front of Fuel Cafe  Fuel Cafe on Center Street between Humboldt Avenue and Booth Street n Milwaukee. It is free for visitors. The event was started by and is sponsored by Fuel Cafe, a Milwaukee institution that has its own milestone anniversary themselves having been open for 20 years now.


Check out this video on the shared anniversaries:


Besides the fact that I found my current motorcycle there last year, I am a big fan of the festival's welcoming aspect - this is not a show for any one bike manufacturer or style. If you just like motorcycles in general, or even just design whether industrial or graphical, it is so cool to see so many different interpretations of two wheels and an engine.

What makes it even more special is that there is a philanthropic aspect. Attendees with particularly rare/custom motorcycles are encouraged to enter their bikes in the ride-in-show judging 16 competitive classes including Best Café Racer, Best Chopper, Best Street Tracker and Best in Show. They also have a Skid Lid silent auction where custom painted helmets are auctioned off - check out the event's Facebook page for some photos of the amazing work done on these things - there are a few I will have to try my hand at winning. All proceeds from the bike show benefit the Steel Shoe Fund, a non-profit aimed at providing support and alleviating the financial strain facing flat track motorcycle racers who have been seriously injured during competition. 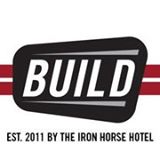 While there you can see the work of another great non-profit project - the Iron Horse Hotel's BUILD Moto Mentor Program. Teams from local high schools organize each year under the program to design and rebuild a vintage “barn-condition” race bike to American Historic Racing Motorcycle Association (AHRMA) racing standards. Each team is been matched with at least one Faculty Advisor from their school and a pair of experienced Mentors who will act as coaches and team leaders, encouraging the students to plan, design, and complete their build. The  BUILD program not only builds bikes, but teaches the students valuable life, trade, and interpersonal skills. where high school teams are given the opportunity to make custom bikes learning a trade skill and valuable life lessons in the process. This year's project bikes will be on display and they are raffling off a pair of Chrome level Harley 110th Anniversary passes to help fund the program at Rockerbox. 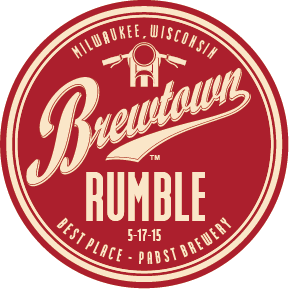 UPDATE MAY 2014: If you hadn't heard, Rockerbox moved from its location on Center St in Milwaukee to Road America for 2014 and beyond. If you will miss an all-inclusive motorcycle culture street festival in Milwaukee, you are in luck. GMM is helping plan a new vintage motorcycle (and all things 2-wheeled) fest that will continue support for BUILD for May 17, 2015 called the Brewtown Rumble, keep up to date on the progress and event details here.
milwaukee motorcycle