Following the Well-Met maxim of 'Social.Responsibility', the Alaskan Brewing Company is making green beer, and I don't mean in color like the shite people swill for St. Patrick's Day. In a shrewd move with economic and ecological ramifications, they are now operating with an alternate fuel source: beer. More specifically, they are using the wet grain known as “spent grain,” left over from the brewing process, as the sole fuel source for their new steam boiler. Alaskan is the first craft brewery in the world to use this brewing by-product in this way, reducing the company’s fuel oil consumption in brewhouse operations by 60-70 percent. 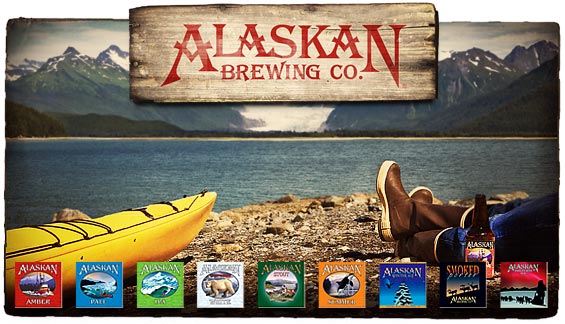 “We have the unique honor of brewing craft beer in this stunning and remote place,” explains Alaskan Brewing Co-founder Geoff Larson. “But in order to grow as a small business here in Alaska and continue having a positive effect on our community, we have to take special efforts to look beyond the traditional to more innovative ways of brewing. Reducing our energy use makes good business sense, and good sense for this beautiful place where we live and play.”

The brewery began the spent grain energy process in 1995 with the installation of a grain dryer. The equipment dried the wet, protein-rich spent grain in preparation for shipment to the lower 48 for use as cattle feed, due to the absence of farms or ranches in Southeast Alaska. Alaskan designed the grain dryer to use up to 50 percent of the grain as a supplemental fuel source to heat the dryer itself. This reduced the oil required in the drying process, and provided experience in burning spent grain that would later prove useful in designing the steam boiler.

In 2008, Alaskan became the first craft brewery in the nation to install an energy saving piece of brewing equipment called a mash filter press. The mash filter press, in addition to providing greater energy, water, and materials efficiencies, produces a lower-moisture-content spent grain than does the more traditional lautering process. This form of spent grain better lends itself to drying and for use as fuel for the brewery’s grain dryer and, ultimately, the new spent grain steam boiler system.

Over the latter months of 2012, Alaskan completed the final stage of the process with the installation and commissioning of the $1.8 million, custom-constructed spent grain steam boiler. This brewing byproduct is a unique and challenging fuel, so brewery engineers put their years of experience with drying grain to work with existing combustion technology to develop and fine-tune this first-of-its-kind process.

Alaskan expects that the new boiler will eliminate the brewery’s use of fuel oil in the grain drying process and displace more than half of the fuel needed to create process steam in the brewhouse. This translates to an estimated reduction in fuel oil use in brewhouse operations by more than half. With moderate growth assumptions, Alaskan expects to save nearly 1.5 million gallons of oil over the next ten years.
beer green