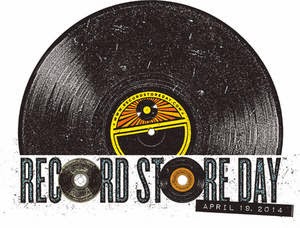 At this point pretty much any remaining store is a locally owned shop (no the music section at your big box store doesn't count), so support Local, support Record Store Day, a day to celebrate independent record stores on Saturday April 19 2014.

Record Store Day was conceived in 2007 at a gathering of independent record store owners and employees as a way to celebrate and spread the word about the unique culture surrounding nearly 1000 independently owned record stores in the US and thousands of similar stores internationally. There are Record Store Day participating stores on every continent except Antarctica - including our very own Milwaukee of course.


This is a day for the people who make up the world of the record store—the staff, the customers, and the artists—to come together and celebrate the unique culture of a record store and the special role these independently owned stores play in their communities. Special vinyl and CD releases and various promotional products are made exclusively for the day and hundreds of artists in the United States and in various countries across the globe make special appearances and performances. Festivities include performances, cook-outs, body painting, meet & greets with artists, parades, djs spinning records and on and on. Metallica officially kicked off Record Store Day at Rasputin Music in San Francisco on April 19, 2008 and Record Store Day is now celebrated the third Saturday every April.

While there’s only one Record Store Day a year, the organization works throughout the year to create contests, special releases and promotions in order to spotlight these special stores on the other 364 days of the year. These include the Adapter Prize—which honors releases chosen as “The Best” by store staff and customers and Back To Black Friday which gives record stores exclusive releases as part of the attempt to redirect the focus of the biggest shopping day of the year to the desirable, special things to be found at local stores.

Go here to search for a list of participating shops in Milwaukee - or anywhere you may be.
local