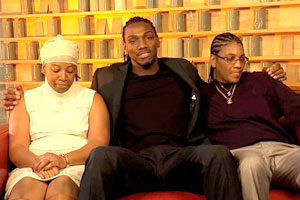 Denver Nuggets forward Kenneth Faried recently appeared in a video released by One Colorado, an LGBT rights group based in Colorado. Seated between his birth mother and her partner - his second mom - he supports marriage equality for others like them.

"I support civil union, because it gives people, gays and lesbians, the right to make decisions on their own if they want to get married and let them choose who they want to be with," he said. "Nobody can ever tell me I can’t have two mothers, because I really do."

He plays in Denver now, where Colorado just passed a bill that allows same-sex couples to enter into civil unions, but his parents' marriage goes back further - to 2007 - when the two women entered into a civil union in New Jersey. Civil unions are one thing, but Faried wishes it would go further:

For someone called the "Manimal" on the court, his courage to step forward and speak out for something that might not be popular in his chosen testosterone-high career is to be admired. But Faried is thanfully not alone, he joins other recent professional athletes including Baltimore Ravens linebacker Brendon Ayanbadejo, whose appearance in the latest Super Bowl provided a platform for his support, and Minnesota Vikings punter Chris Kluwe as vocal supporters for marriage equality.

Let's hope their work helps promote the issue, and further, that in the future it ceases to even be an issue and equality is something we just do and don't have to work for.