- January 30, 2014
Everyone knows how dangerous Carbon Monoxide is, but a lot of people believe that it won't happen to them. But just as smoke alarms were scarce, and still are rare in many communities, despite being required by law, the detectors are probably missing in most homes.

Just like the last story on male breast cancer, this one has a personal take, not me, but my parents this time.

They recently had an incident where a detector very well could have saved their lives so I am glad they had one. Here is my dad's account. Thanks dad for chronicling what hopefully will open others' eyes.

"I am writing this because my wife and I had an experience this past weekend.  At about 7:15 AM on Sunday morning our carbon monoxide alarm went off. Yes we do have one, even though I thought it would never go off.

The first thing we thought of was to check the outside vents for the furnace, to make sure they were not blocked. Then I checked the battery in the detector, but it was good. Then we called the fire department. They told us to get out of the house and open doors and windows, which we did. They sent out the on-call fire fighter. He came with the carbon monoxide meter. It indicated the furnace was giving off a small amount of carbon monoxide. He suggested calling the furnace company that we deal with and before he left he gave us his cell phone number in case we had any more questions. I called the furnace company and got someone that answers their phone out of hours. She said she would have the technician call me, but indicated that if he had to come out it would be $140 an hour. That was not really a concern as the way it was we were not sure the house was safe.

The technician did call me and said he was at church and would stop by on his way home, wow. This is the company that originally installed the furnace and we knew the technician as he had just performed the yearly checkup last spring. Guess it pays to use and know your local service companies.

He asked me a couple of questions while on the phone and after hearing my answers he said he knew what the problem was. He said it was one of the two heat exchangers in the furnace. He did stop by to confirm that and made an adjustment that he said would make the furnace save. He said he would get the heat exchanger ordered and come out to replace it as soon as he received it.

The good side of this story is that the part was covered under warranty, as it is a $1,500 part. The part got replaced on Tuesday and all we had to pay for was the service call.

The moral of this is that the carbon monoxide detector, if not saving our lives, prevented us from getting really sick. So if you do not have one in your house, consider getting one as it could save your life. They are not very expensive, $20 to about $40 dollars. A cheap price for a life saving device."

As my dad says, they are inexpensive, and also unobtrusive. Unlike smoke detectors which may stick out, these just plug into an outlet - and that means no need to remember to replace batteries. I am obviously glad my parents had one in their house, and we all should. Guess I should go out and buy one - no mom and dad, we have not gotten one yet, it was not required when we got our house, but this will make me get one. 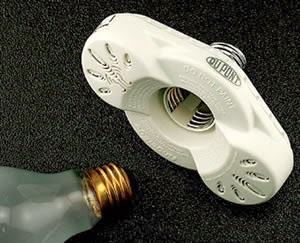 By the way, did you know there are similar options for smoke detectors, ones not needing batteries? Sure there are hard wired ones, but there are also ones like I got for our house - that screw into a light socket like the basic one in your basement or closet. If you never want to worry about your smoke detector batteries (forget the whole daylight savings reminder - if you ask me we should get rid of that anyway)  just get a half dozen of these, screw them in and your bulb into it, and forget about it.