Do Good, Feel Good. That Is All. 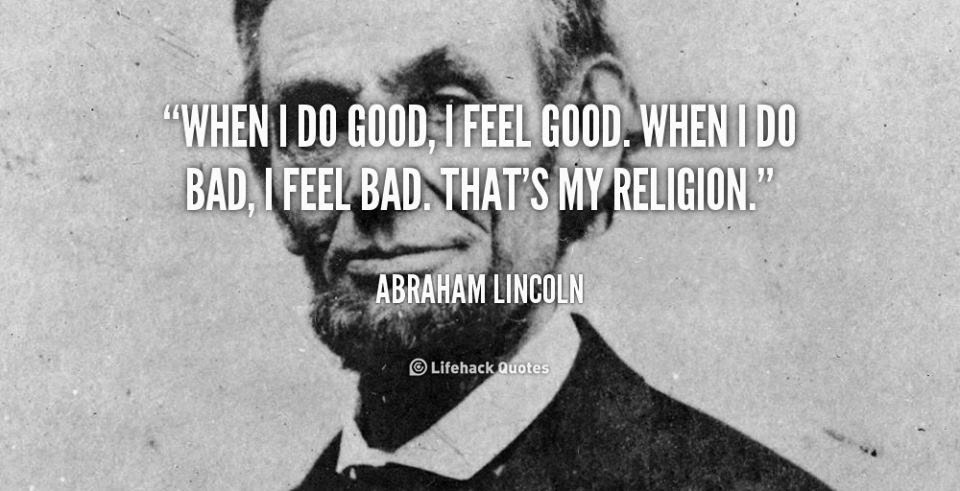 Today is the date of Abraham Lincoln's birth which reminds me of perhaps my favorite quote by anyone, ever. Of all the wise people and wise things said, this to me sums up how I want to live my life:

I couldn't agree more. Despite what they may all think of each other, most of the teachings and saying of all the world's religions come down to instructing us to try to be good. The problem is there is usually a caveat - we are to do good to get something now or later from the supreme being(s) rather than simply just because we should. That is why I agree with Lincoln that my religion is simply to do good - for others but yes also for myself.

But do we truly feel better when we are better - feel great when we are great? Simply, yes.


Of course nothing is simple and just like eating well, exercising, and all the other things we know we should just do rather than trying it and seeing for ourselves we too often want proof before we start. You want proof? Here are some snippets of information from other sources:

According to Healthy Living, 'There’s no shortage of research showing that people who give time, money, or support to others are more likely to be happy and satisfied with their lives'.  Besides research that showed people of different groups were less depressed if they did good, there is some hard science beyond just emotional well-being:


In a recent study published in the Proceedings of the National Academy of Science, participants’ brains were monitored by MRI scans while they made decisions about donating part of their research payment to charitable organizations. When participants chose to donate money, the brain’s mesolimbic system was activated, the same part of the brain that’s activated in response to monetary rewards, sex, and other positive stimuli. Choosing to donate also activated the brain’s subgenual area, the part of the brain that produces feel-good chemicals, like oxytocin, that promote social bonding.

Live Science continues with the good news. In a study conducted with undergraduates at the University of Louisville in Kentucky, 'They found that the more people participated in meaningful activities, the happier they were and the more purposeful their lives felt. Pleasure-seeking behaviors, on the other hand, did not make people happier.'

The Greater Good Science Center at Berkely talks about a 'virtuous 'cycle (vs. a vicious one) of goodness similar to the 'pay it forward' concept where doing good makes you feel good making you want to do more good - and what's not good about more? In a study with three different groups 'The groups that practiced kindness and engaged in novel acts both experienced a significant—and roughly equal—boost in happiness; the third group didn’t get any happier.' Even more telling was another study where they gave money to people and while we think buying ourselves nice things makes us happy they found something different: 'people in general felt happier when they were asked to remember a time they bought something for someone else—even happier than when they remembered buying something for themselves. This happiness boost was the same regardless of whether the gift cost $20 or $100.'

There are many more articles out there, just search for 'doing good makes you feel good' or something similar and read to your hearts content. My favorite part among these articles is in the Healthy Living one when they state that 'Since depression, anxiety, and stress involve a high degree of focus on the self, focusing on the needs of others literally helps shift our thinking.' I can definitely see that, among the people I know those that focus most on themselves seem the least happy. It may seem counter intuitive - in order to make yourself happy don't you need to focus on yourself? The problem is that when you focus on yourself you too often see the worst in yourself, what you are trying to fix, but when you focus on others and help them you help yourself.

Some may say its similar to the Golden Rule or the Ethic of Reciprocity - but to me that still has a focus on yourself. You are treating others as you want to be treated - the 'reciprocity' means a return. But to do it because there will be a return is still one step beyond and more of a self concept when I consider it while Lincoln's quote is more about just do do and be good - just because. Still, not that either is a bad concept - I just prefer the simplicity of how Lincoln said it.

Lincoln said the concept is his 'religion' but what does he mean. He was raised in a highly religious family but throughout his life he had complex views about religion itself if not about the existence of God, a higher power, which he made evident in many speeches. At points in his life it s know he was even a skeptic and was at times suspected of atheism and agnosticism.So I get that he was spiritual and humble but may not have connected to a single religion and thus in this quote he is defining that without being anti-religious. I didn't necessarily set out to talk about religion at all - GMM after all is supposed to be areligious and apoliticial - but it is right there in the quote. I will admit that I myself am a skeptic, but then I don't feel I need nor want a religion as I hold morals that to me are irrespective of being religious or not. For all their best intentions, the fact that each one thinks they are the one and only correct path leads to conflict as much as or more than fights over borders or resources or politics (after all so much of politics is based on religion). That doesn't mean I belittle others for following one, we all have things that help us get to where we need and want to be. But like Lincoln, my religion is simply to be and do good. I just hope that everyone takes that message from their religion above and beyond all others. Me, I'll just do good because it makes me feel good not because some book said I should.

Last night I had the opportunity to go to the Lance's Brewery Tour event at Best Place and though on one hand I did something for myself, going for a beer or three with family and friends, it was the act of meeting Lance Rice and his nephew Aaron and learning more about and supporting their mission to create awareness for autism that was more meaningful and fulfilling and I was beaming when I came home and still am today about being even a small part of that. I can spend hours at a fundraising event running around helping put it on, but afterwards I am more energized than fatigued. So I know that when I do good I feel good.

Lincoln is known for many great things he did and said, but to me this may be his wisest words, for they hint at everything else he accomplished and why he did so - just because doing the right thing makes you right in turn - doing good makes you feel good. In his case doing doing immeasurable good made him Great.