#ItsOnUs To Stand Up To Sexual Assault & Harassment

- October 20, 2016
Though I usually try to keep things upbeat here and celebrate men doing good, and I also stay away from political and religious issues, there are times when I need to draw attention to an issue and try to inspire men to help fix it. Now is one of those times. There are many upsetting things right now: the state of the Packers, the impending end of motorcycling season - not to mention real issues like racial relations, the fate of Syrian refugees, and gun ownership. But there is one issue that is looming above all the others for me right now: sexual harassment and assault. 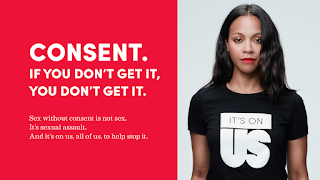 It seems like we can't go more than a week without a new story about sexual assault, sometimes multiple reports per week, involving college students, professional athletes, fathers, police, and yes even a presidential candidate. Its ironic, in the worst sense of the word, that while our current president created an initiative to bring attention to the issue, a man who wants to be president is the very subject matter of the initiative. President Obama created the It's On Us initiative initially to address college campus sexual assault, but it's unfortunately needed beyond the confines of campuses and into all areas of American society, all the way up to someone within steps of the highest position in America, let alone the world. It's On Us asks everyone -- men and women across America -- to make a personal commitment to step off the sidelines and be part of the solution to campus sexual assault, and I am asking all you men out there to show how great you can be by getting involved in the conversation and become an activist for the issue.

October 23-29 is the It’s On Us National Fall Week of Action, and it can't come at a more opportune time. In the past few weeks I have seen at least 4 highly visible stories about sexual assault both local and national (global even) and even witnessed an instance of sexual harassment personally. A local police officer (who also happens to be the officer involved in the shooting of Sylville Smith near Sherman Park) was just charged with multiple cases of sexual assault. Numerous times recently college students have gotten off light on sentences of sexual assault convictions. A man who assaulted his own daughter multiple times just got off with only the 60 days he had already served, taking a plea on a 25 year sentence that was whittled down by the judge to time served (plus probation). And of course there are the comments, revelations, and accusations of Donald Trump and his at minimum verbal abuse of women, and accused (not yet proven) full-blown sexual assault. It shocks me that he still has the support, especially by so many conservative/Evangelical Christians, whether recent accusations are true or not, just by his comments and actions. We'll return to him later.

Unless you know or are a victim yourself of sexual harassment , and it happens more often than you might think (About 14% of reported rapes involve men or boys, and that 1 in 6 reported sexual assaults is against a boy and 1 in 25 reported sexual assaults is against a man according to the National Alliance To End Sexual Violence) - men cannot comprehend what it is like to be a woman. A very large number of women (1 in 5 on college campuses alone) experience some form of sexual harassment or even assault. You may come close to having empathy if you are close to a woman who has experienced it, or as I did see it yourself, but you still can't understand the fear of nearly all women that at any time they can experience harassment or assault. My recent experience was at a professional sportsball game, in the stands. You know how it is in the stands or at a concert or any show, if you have to leave your seat and pass by people you have to get very, awkwardly close - close enough to touch accidentally and yes even unfortunately on purpose. Well, at this game, some post-college yahoos were getting drunk up a nearby aisle and when two of them went off to get more drinks, or maybe to the bathroom, they passed by two women in the aisle. They leered at the women and even, as they passed touched the women's chests. Some choice words were shared by who happened to be the husband of one of the women and the men were shoved along to get out of there, thankfully they were smart and sober enough to not come back to their seats from that direction. But there it was, right in front of me - in front of hundreds of people, two men who should have been better men, unwanted and inappropriately touching women not even thinking its not something they should do. No reservations or fear that they were doing this in public, as if it's something perfectly acceptable. I was and still am flabbergasted that someone would do this in private let alone have the balls to do it in public.

It's not cool, it doesn't make you 'manly'. It makes you a coward, weak, unwilling and unable to ask for and wait for someone to give you permission, to consent, to affection.

We all, everyone, but especially men, have to take a stand and speak up when we see or even just hear when men are speaking in terms of sexual harassment of women (and also of man-to-man harassment as the case in the police officer.) We can no longer ignore it, no longer be afraid of the optics of confronting another man on his attitudes and actions. When a man uses harassing terms and language, we cannot just walk away or even nervously laugh along, then regret that we didn't speak up and speak out for women. We can't take the 'it just boys being boys' attitude and overlook when men talk about sexual harassment or assault.

And that's why we can't elect Donald Trump. This will be my first ever politic-related post, but I don't even see it as a political issue - it's not about a party, or the issues, or a philosophy - its about integrity. Whatever you think of him otherwise - I won't get into all the other personality traits I find abhorrent about the man - and whether you believe recent accusations, Trump said it, he went there. He made the comments about women to Billy Bush and has has made many other harassing or disparaging remarks about women. And because of that alone he is unfit to be the leader of the greatest nation. We cannot even think about voting in a man who has these morals, who thinks its OK to treat anyone this way. Regardless of your politics, on November 8, I ask you to vote with your conscience and vote against a man who definitely has no business being the candidate for a major party for President of the United States. Don't skip the vote, vote - for someone - make your voice heard, show up in the numbers of those not supporting Trump. Make it known that his behavior is not acceptable, and maybe it will trickle down.

Then, take action beyond election day. Take the Its On Us Pledge, and follow through on it. Read up more on sexual assault in general at organizations like the National Alliance to End Sexual Violence and RAINN (Rape, Abuse & Incest National Network) and help support their efforts. Be a great man.
#itsonus abuse election politics rape respect sexual assault