Systematic. Militarization. Escalation. the state of Police in America: A Firsthand Experience 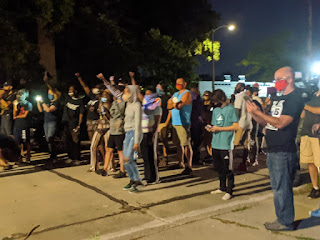 Last night I witnessed firsthand the inflammatory nature of law enforcement the way they operate in today's America.
Taking the race thing out of the equation (which we can't), I saw their modus operandi. From the beginning to the at least reasonable and peaceful end.
From my perspective, here's a pretty simple concept: the way to react to people protesting police violence is not with police violence.
For a few weeks, every week, peaceful protesters have come up our street as we live a block away from the new Mayor of Tosa. They protest an officer still being on the force that has killed 3 men in the line of duty. Now, the Mayor doesn't really have personnel power over PD but he still is a community leader so I get them wanting to make a statement. It has always been peaceful, they show up, well organized, stay in the street, off property, and just speak for around 15-20 minutes and leave.
That changed last night. Not because of them.
Every other time there has been minor police presence, mainly to direct traffic away behind them so people don't get stuck mid-block. Last night the police tactics changed. This time the had officers set up in front of the protesters, a block away from the Mayor's house, right in front of our house. When possible we have tried to go out and cheer on, even join, the protesters, and last night was no different. So we saw when three police vehicles came and made a blockade outside our front door. Then one protester on a bicycle tried to proceed forward. The police took him down. They grabbed him off his bike, three police threw him down, and they tackled him. You can judge for yourself watching the video here (recorded by lawmaker no less - Rep. Jonathan Brostoff), but it was unnecessary and more forceful than it needed to be, there really wasn't any resistance. Any motions by the subject were more to gain balance from being ripped off his bike than against the officers.
Of course this was not liked by the fellow protesters. They tightened up on the police, to protect one of their own. There was no violence by the protesters. They just congregated more tightly around, shouting at the police to stop. There were waves of action and reaction, again mostly peaceful. But over time you could see the police ratchet up the situation. Police, half with masks and half without (you are in close proximity to people, for the public's safety, and for your family regardless of law and your own health - come on -  wear one) pulled out batons. One or two got our riot shields. It escalated over time with many local forces joining in, police making a shield wall, and a standoff occurred. Because we are on a corner we could walk through our yard from the front to see the protesters, and get behind the police to see their reaction. You could see each wave come with more and more gear, the sheriffs had full on body armor gear on. 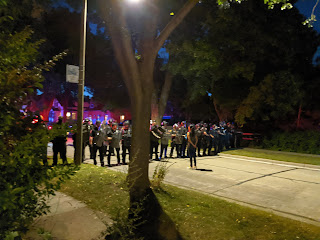 Throughout it all, protest leaders kept their side calm, focusing them to stay in the intersection and not escalate from their side. Police claim in a statement "The protesters attempted to prevent the arrest by physically engaging officers and blocking off routes, preventing squads from leaving." That is not true. Police could have turned around or backed up and left away, they were trying to drive through the intersection and the protesters. Eventually an ACLU lawyer for the protesters talked to police and got them to leave, but they did so literally one step at a time backwards, the lawyer walking them back (you can see my wife's video here). The protesters stayed where they were, they did not follow and taunt police, and eventually moved on from here to go to the police station to protest there.
All the police needed to do at the beginning, even at the end, was let the protesters walk. They would have done so, said their peace, and then continued on. The police could have dispersed, but they didn't want to look weak, like they just turned and left, so they did their walk back, which just made the ACLU lawyer and the protesters look stronger for their actions, or lack of actions, just letting them retreat.
As we have seen elsewhere, these situations are escalated by one side: the police. If and when left to their own devices, protests end without any violence or destruction or negative interaction with police. But when law enforcement steps up, as Newton said, for every action, there is an equal and opposite reaction.
This isn't what police are needed for. Nothing was going to happen if they just let the protest proceed as it had the last five times I have witnessed it. No crime was committed, no person or property was in danger. No one needed help. But police inserted themselves and we saw the result.
community law enforcement rights Wauwatosa